The Irish Football Five’s World Championships (F5WC) is a global initiative to select talented amateur football players through regional 5-a-side qualifying rounds around the world, to then compete in the World Finals in China in September of 2018. The tournament aims for mass participation amongst amateur football players, who play as amateurs whilst bringing together countries to celebrate the beautiful game.

In Ireland, Astropark and Inter7s.com have combined with Astroleagues.ie to bring you this amazing 5-a-side tournament with qualifiers all over the country.  This is the largest small sided tournament in Ireland with the incredible prize of representing your country on offer.

The Football Five’s World Championships (F5WC) is a tournament involving 32 nations comprising of the following continents:

-Qualifier tournaments will take place nationwide in Ireland
- The Irish finals will bring together the top 32 teams from the nationwide qualifiers, in a one day tournament on June 30th, 2018 in Astropark Coolock, Dublin.
- The top 8/16 teams on the day will receive a set of jerseys
- The winning team will be crowned the Football 5s Irish Champions, with a top prize including flights, accommodation, full kit and all expenses paid for 7 players to the Shanghai World Finals.
- Cost per team is €129. Price includes qualifier, finals, vat and referee fees.
- Qualifying tournaments are round robin format through to knockouts.  Minimum 3 games. 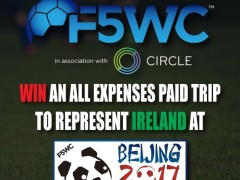